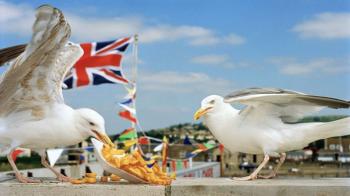 Hangar is delighted to present the first retrospective in Belgium of the English photographer, Martin Parr (°1952). This exhibition retraces forty years of the artist’s career through 15 symbolic series. Over 400 colourful and quirky images, filled with fun and irony, are displayed across the three floors of the Hangar art centre.

A modern-day satirist, Martin Parr is considered one of the most important representatives of contemporary documentary photography and is hailed as one of the most famous photographers in the world. As a “chronicler of our time” (so says Thomas Weski), he scans the world with his mischievous gaze, producing unusual images, often exaggerated or grotesque, in garish colours.

Associated with quintessentially English humour, he photographs Western society – sometimes ruthlessly – shaped as it is by mass consumption, an unpredictable economy and a dysfunctional political backdrop.In addition to works from celebrated series such as The Last Resort, Think of England, Luxury and Common Sense, the exhibition also includes his early series: Bad Weather and Non Conformists.